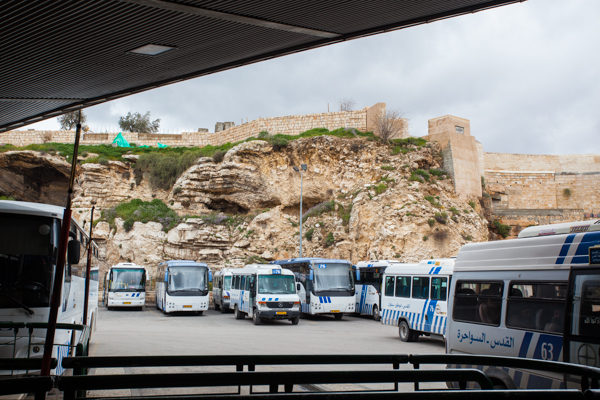 The bus terminal at the foot of the hill many believe to be Golgotha, The Place of the Skull, where Jesus was crucified.

As a student in school years ago, I was always so very glad when I passed an examination. I believe that throughout my life God has given me examinations. One day I was sitting in a room at the Hamilton YMCA, praying with a young man named Gord. His face was buried in a paper bag which had airplane glue spread on the bottom. I had seen Gord a couple of weeks before sniffing glue in a park. I brought him home to Norma-Jean, who responded with love. This time, at the “Y,” God gave me an exam. Gord lifted his head from the bag long enough to spit in my face. The old David, who had a bad temper, was no longer there. I felt nothing but the love and compassion of Jesus. I had prayed in those early years, “Lord Jesus, when I grow up, I want to be like You.” I knew He was answering my prayers. Gord gave his life to Christ soon after this. Stephen, the first Church deacon, was truly like Jesus. He’s one of my examples of one who passed his examination with a mark of 100%.